16 Reasons Why David Beckham Is A God Amongst Men

There’s no doubting that David Beckham is one of the biggest names in the world and he has been for over a decade and a half now. From the pretty boy who scored some stunning free kicks to the powerhouse of a man who owns football clubs, multiple houses in multiple countries, has brought “Soccer” awareness to America and so much more. However, it’s the human things that he does sometimes, the down-to-earth side that he shows that let everyone know he’s still that boy we saw back in 1995 and he’s still one of the nicest celebrities in the world, both on and off camera. So here are 16 Reasons Why David Beckham Is A God Amongst Men.

1. A true gentleman never forgets his mother and David Beckham does not. He’s always taking her out for meals and was with her at Wimbledon too. She must be one proud mother!

2. He’s met the queen on several occasions and yet is still not recognised as a Knight. It’ll be interesting to see if this is something that will come later in his life.

3. He’s got quite a few famous friends who he hangs around with casually as if it’s no biggy in the world.

5. He’s incredibly supportive of his family in whatever endeavours they take up

6. He was also incredibly supportive of the Lionesses during their World Cup streak that saw them come third place in the world!

8. He has a passion for bikes and has a TV Show come out about his trip across the world with some friends

9. He wants to stick up for himself when he feels he’s been told his parenting is bad. That’s a line you don’t overstep with David Beckham… 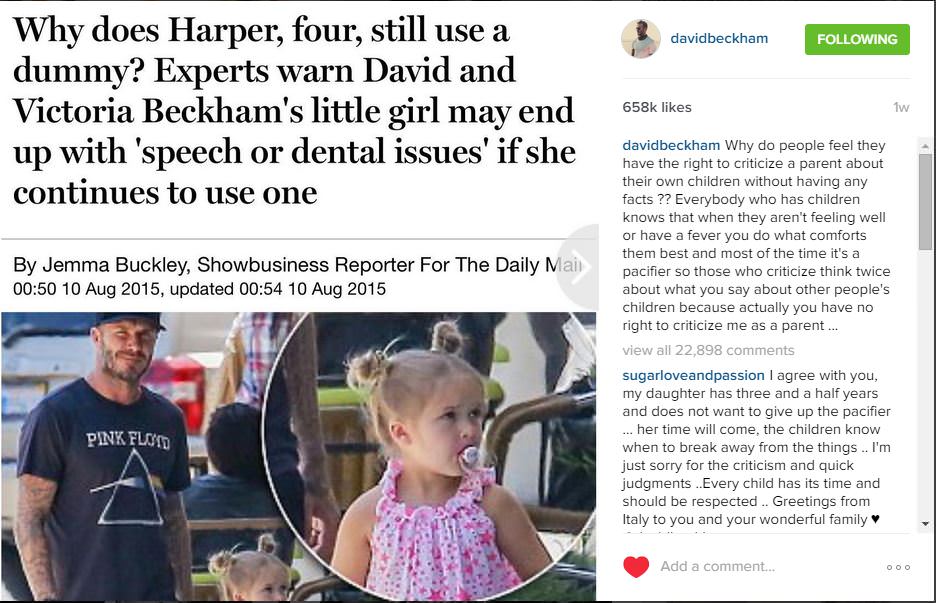 10. He’s very proud of his three young boys and loves to tell us of their achievements and how lucky he is to have them

11. But we definitely think he’s a girl’s daddy at heart and definitely treats his daughter Harper like a princess

12. Let’s not forget the time he let her dress his hair up despite nursing a sore head from his 40th birthday celebrations the night before

13. And let’s NEVER forget just how damn well this man dresses! He has, for a long time, been a fashion icon and even after retirement he’s still naturally sharp with his clothing choices

14. He’s also forever charitable and helps whenever he can for those who haven’t been as lucky in their lives as he has

15. He still manages to get some serious gym time in despite probably being one of the busiest men in the world

16. And finally, he’s ridiculously good-looking. If a guy ever had a good reason to have a man-crush, it would definitely be David Beckham. It’s not really fair on the rest of us lads!

0
It’s quite common for celebrities to give their children weird, strange and downright unusual names, but many celebrities themselves have nicknames that are just...
Read more
Celebrity

0
There are some celebrities who like showing off just how much money they have and there are others who would rather put their wealth...
Read more
Celebrity

0
There are many incredible people throughout history who we know for their incredible impact on certain fields of science or nature or for having...
Read more
Celebrity

0
Ever since the unfortunate incident that took place between Chris Brown and Rihanna, the assault has quite rightly followed the singer around wherever he...
Read more

Most Awaited Dreamworks Animation Films Coming Out Over The Next Few Years!

0
Dreamworks Animation has produced lots of classic animated movies, such as the Shrek series, Home, The Croods, the Kung Fu Panda series and the Madagascar series. Let's have a look at the studio's upcoming films that are coming out over the next few years.
Read more

0
It’s very easy to accidentally hit ‘send’ before you’ve double checked the message you’re sending. Imagine what it’s like being a celebrity with hundreds...
Read more

0
Now that winter is on its way it means one thing - no not Christmas. It's nearly time for the funnest day of the...
Read more

9 Ridiculously Insane Celebrity Homes That Will Make You Jealous

0
Modesty is something a lot of celebrities don’t do, which is why many of them invest millions into homes that the rest of us...
Read more
© © Copyright 2015-2018 - Voolas - Made by few Internet vagabonds.