Bringing us much further into the future now. Minecraft started off as a PC-only game but has transitioned really well to the mobile phone platform utilising some good touch controls. The game is in fact still not 100% complete on Mobile and still classes itself as a Beta. However, it’s a truly fledged game that can keep kids and adults entertained for hours.

Tetris is another classic. Tetris obviously started out first on the original Gameboy has amassed a huge following with its simple yet addictive gameplay. However, the modern Tetris has sold over 100 million copies, being the highest selling game of all time. A lot of these sales came from the Android and iOS platforms, surely that’s an addictive game!

Pacman is yet another classic. Everyone fell in love with the little yellow circle as he tried to evade the ghosts and collect the fruit and collect the little dots. The has actually just been released as a completely new idea from the makers of Crossy Road. However, the original is still as addictive as heck too!

Candy Crush Saga is one of those mobile games that absolutely everybody is playing. Your Uncle, your nan, your best friend, your 4-year-old niece. Considering this game is merely based off the Bejewelled concept, it absolutely took off and has become one of the best-selling mobile games ever.

Angry Birds was arguably the first big mainstream popular game for modern touchscreen mobile devices. It was the first game that had many people agreeing that iOS was certainly going to be a big part of mobile gaming in the future. Now arguably, thanks to the likes of Angry Birds, gaming on an iPad is arguably one of the best mobile gaming experiences out there.

Who remembers Doodle Jump? I do! This was another early adopter of iOS and as a result, had some great success. Doodle Jump was easy, you used the new accelerometer in the iPhone to tilt your little Doodle character up a path of little ledges. Obviously it got quicker and harder as you progressed and obviously you had to try and beat your high score. 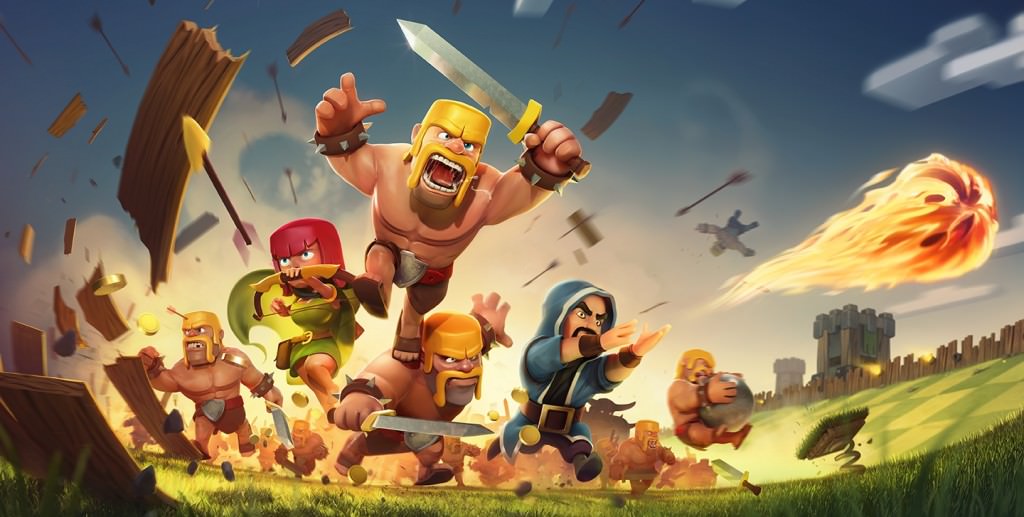 We had to give this one a mention. Arguably one of the biggest games on mobile right now, Clash of Clans brought in the whole idea of building a city and using it to fight other cities whether they’re AI or your friends. The game has become so popular because of the levelling system, the ability to attack your friends and feel like you’re the best city and army.

Temple Run was a great little game. We love the games that were simple but still managed to keep us hooked. Temple Run was just swiping in four different directions to navigate a route. As we said, simple. However, it was certainly addicted and got many people hooked and talking about the game. We’ve seen quite a few reworks and remakes from other publishers since.

Fruit Ninja was great. It was another early adopter of iOS and used the great swiping and multi-touch systems to allow you to swipe different fruit. The idea was that fruit flew up in the air and you had to slice it before it fell. Since, the game has come to the Kinect and has release a sequel, neither of which are as popular as the original.

Draw Something was one of those great games that had everybody playing with their friends which are always the most popular mobile games. On top of this, it allowed people who were genuinely artistic and talented to show off their prowess. If you Google ‘Draw Something Art’ you’ll find plenty of amazing drawings people have done.

Plants vs Zombies was absolutely brilliant on iOS. It was a game that made absolutely no sense and yet that didn’t matter because the gameplay was fun as heck and addictive ever more. Since the original there has been a sequel which is doing really well and a console game similar to Team Fortress 2.

QuizUp was another one of those games that took advantage of people wanting to play mobile games against their friends. QuizUp was a simple quiz game that allowed you to compete against other people with many different categories. It came out around Christmas too which helped with sales as many people wanted to play it with their families on their new devices.

Luke Harkness
Previous articleWhat’s The Fastest Land Vehicle To Have Ever Graced This Earth?
Next article5 Star Wars Questions That Remained Unanswered

12 Reasons to Play FIFA Over PES This Year (in progress)

14 People Who Failed So Incredibly Hard That Its Unbelievable! #5 is Just Ridiculous!

Robin Williams – One year On

Simple Reason Why There Shouldn’t Be A Second Brexit Referendum

7 Celebrities Who You Won’t Believe Supported Brexit – #4 is The Lamest of All!