Art Of Taking The Best Selfies – Celebs That Rock A ‘Suitfie’

The latest craze to match the huge hype that is the selfie. However, this craze is for the men as they have taken on the challenge of achieving the perfect ‘suitfie’, yes this is officially a suit selfie! So either either prepare to take tips or have a scroll of the eye candy, as we have found the best 15 celebs that rock a suit selfie, suitfie.

Top of our list just had to be the one and only, David Beckham. He has always been a style icon so it’s no wonder he rocks a suitfie. Combining his great suit with his excited fans looking happy as ever, is there anything this man can’t do?

Scott Disick probably invented the suitfie, he loves to dress well and act the ‘Lord’. We love this suitfie with Kourtney.

Bradley Cooper rocks a suit and always looks very polished and smart so it only makes sense that he looks great taking a suitfie too.

The face behind Barney from How I Met Your Mother always wears suits on the show and carries on to look this good off the show too.

Dwayne Johnson aka The Rock

Dwayne Johnson is a huge personality that also seems like fun and scrubs up very well. Its no wonder he takes a brilliant selfie and futher to that a great suitfie.

Recently married, Mark Wright, from TOWIE, events planner and overall fun tv personality is also known for his good looks and great fashion style which is clear from this playful suit shot. Yes, this might not technically be a suitfie but he definitely wears it well.

Spencer Matthews, the lady’s man from Made In Chelsea, often wears expensive London suits and has taken to showing them off to the whole  of instagram, can you blame him ? 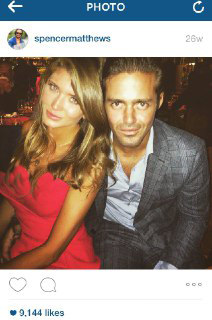 Bradd Pitt.. need we say more? He might be getting older but he still looks incredible and he is still with the latest trends, hoping on the suitfie wagon!

Ed Westwick is a brilliant example to proudly wearing a suit and pairing this with an extra smooth suitfie. He always scrubs up well and is often seen with A listers on each arm. On this occasion he had received last minute personal invites to the annual VS fashion show with his good friend Tinie Tempah.

Matt Bomer, plays slick characters all the time and maintains this slick persona off camera too, so the suitfie is easy for him.

Heart throb Ryan Gosling can pull off pretty much any look, but in particular he rocks the suitfie and shares the moment with his gushing fans.

Daniel Craig wears amazing suits and has to upkeep his look, especially when you’re someone that doubles up as the one and only James Bond. With this package comes some unrivalled suits and suitfies  to match.

Zac Efron demonstrates the ‘suitfie’ on the move, taking a snap in his 3 piece suit in the car and using black and white filters to polish the overall look off.

The fashion designer and world respected style icon, also jumped on board taking his very own suitfie in what we can only guess is a Marc Jacobs designer suit. This photo is sheer elegance and fashion.

We couldn’t forget this epic selfie that is actually also a suitfie! It doesn’t get much better than this, including tons of huge stars all rocking designer suitfie.

Luke Harkness
Previous articleWould You Text Your Pet if You Were in 1 of these Situations?
Next articleThe Animals Which Were Tortured Previously And Made News – See What they’re Going Through Now

Are the Spice Girls Reuniting? Here’s What They’re Doing Now

9 Classic Playstation Games We Enjoyed In Our Childhoods and Would Still Love to Try!