Voolas
Home Science 20 Amazing Nature Photos That Will Make You Look At The World...
FeaturedScienceTravelWorld

In this era of Photoshop and special effects, it’s easy to forget how beautiful our planet really is. Here are ten magical natural sights from around the world that you should definitely make time to discover!

The landscape that inspired some of the Brothers Grimm Fairy Tales, the Black Forest in southwest Germany is 99 miles in length and 37 miles wide. Named for it’s density, the forest is a popular tourism spot due to the picturesque villages and stunning hiking routes embedded within.

The unusual colours of the rocks at the Zhangye Danxia Landform Geological Park in the Gansu Province of China are due to red sandstone and mineral deposits being laid down over 24 million years.

Also known as ‘the cave of crystals’, Naica is a working mine operated by Mexico’s largest lead producer Industrias Peñoles. Despite intervention by humans, these huge gypsum crystals are still in tact and are as large as 4 feet in diameter and 50 feet long.

These beautiful caves are only temporary, as their entire existence depends on the fact that a glacier is melting. Incredibly, as the glacier recedes they are giving way to ancient trees and forests that have been frozen for the last 1000 years or so. You can explore these caves, if you have an experienced guide and you’re willing to climb a glacier.

Found off the coast of Belize, this sinkhole is more than 400 metres deep and is one of the top scuba diving sites in the world.

15) Sea of Stars, Vaadhoo Island in the Maldives

Caused by phytoplankton, a form of marine microbe, this bioluminescence is liking looking into a reflection of the night sky.

These glorious hot springs and travertines (terraces subsisting of carbonate minerals left by the once flowing water) in southwest Turkey are so enticing that tourists now have to be kept away to preserve the sites natural beauty. However, the ancient Greco-Roman city of Hierapolis, which was built on top, can be seen from the hills opposite.

13) Cenotes of Yucatán Peninsula in Mexico

Meaning ‘sacre well’, Cenotes are naturally formed swimming holes created by the collapse of porous limestone bedrock. These pools are filled with water filtered by the earth, making them so clear you can see right to the bottom. Ancient Mayans believed cenotes were spiritual wells where they could communicate with the Gods, and built villages around them. It’s hard to believe this that between 1949-1967 Fort Bragg residents used Glass Beach as a dump site for plastic, glass and appliances. When the site closed down various clean-up programmes attempted to repair the damage, and over-time the waves broke down the glass and pottery into small, smooth pebbles; transforming it into the eye-catching location it is today. So, although not technically a hundred percent natural, Glass Beach is still a beautiful and unique site, and not to be missed when visiting the MacKerricher State Park of which it is now a part of.

Ha Long Bay in northwest Vietnam is not only known for its emerald waters, but also for its thousands of limestone islands named after things they resemble. For example ‘Stone Dog’ and ‘Teapot Islands’. Each is topped with a rainforest, and as well as boat tours the area attracts scuba divers, hikers and rock climbers.

Located at the centre of General Carrera Lake, the marble caves were gradually formed by waves over the past 6000 years.

Lying along a stretch of the Koekohe Beach on the south coast of New Zealand, these boulders are admired for their unusually large size and spherical shape.

Also known as Lac Rose (pink lake), Lake Retba can be found in Senegal, northwest Africa. The unusual pink tinge is caused by Dunaliella salina algae, and it’s high salt content which like the Dead Sea, causes people to float.

Another lake with a quirky twist. Due to its rich concentration of minerals, when the majoirty of the water evaporates over the summer little pockets of various colourful compositions appear on the lake (hence the name).

Located in the southwest of the USA, Zion National Park is known for its red sandstone canyon, which 15 miles long and half a mile deep.

Salar de Uyuni is the world’s largest salt flat, located in southwest Bolivia. A massive 4,086 square miles, this phenomenon was formed when a larger prehistoric lake dried up and left his salt pan or ‘salt dessert’. It is described as one of the world’s natural mirrors, as the ground becomes reflective if a thin film of water gathers on top. 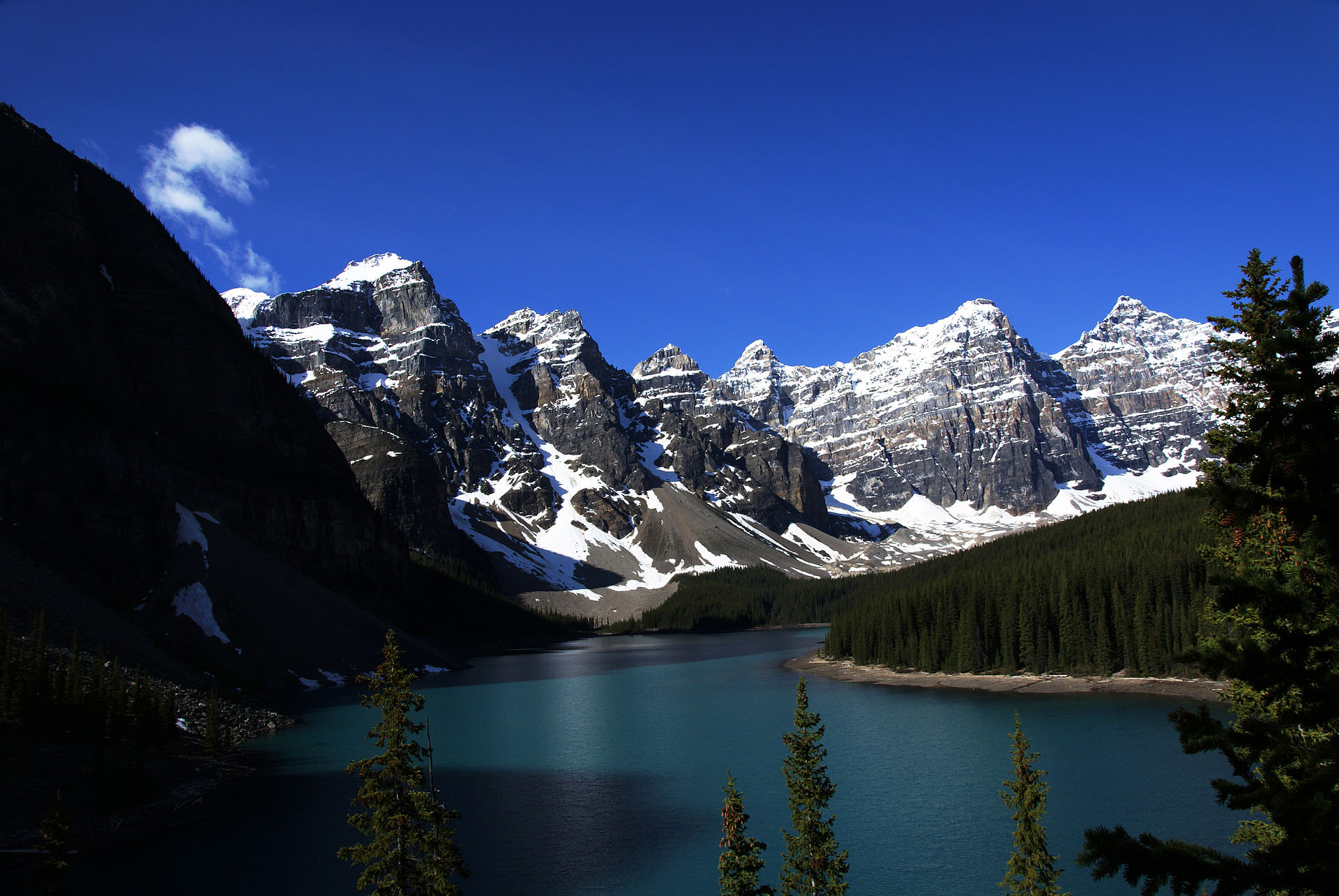 So perfect it could be a screensaver, Moraine Lake is situated in the Valley of Ten Peaks, Canada. As it is glacially fed, it doesn’t reach it’s full height until July, when it begins to refract of the rock flour that continuously falls into it’s depths and turns a distinct shade of blue.

Rather than sand, this beach in Panjin, China is covered in a type of seaweed called Sueda, which is green in the spring and summer months but turns red in the Autumn.

Located near the hillside town of Takinoue, this park is popular picnic spot (for obvious reasons). Shibazakura Flowers cover 100,000 square metres of the hillside every spring, drawing a crowd from far and wide. Aficionados say the best time to view the flowers is from mid May through the beginning of June, and if you find one with more than five petals it’s said to be good luck!

Which spot was your favourite?

Sophie Lloydhttps://culturepoppress.wordpress.com/
I’m a freelance journalist and general arty person. I love anything creative and I have a degree in Fine Art as well as a Master’s in Arts Journalism. I’m passionate about fashion, feminism and bacon, and have a morbid streak that can only be satisfied with pizza and horror films. Follow me on Twitter for more of my random ramblings.
Previous article19 Kids Crying for the Silliest Imaginable Reasons
Next articleThis Puppy’s Heroic Effort Will Make You Leave Everything & … Clap

0
If you haven't got a head for heights, you might want to look away now. We've collected 8 photos of people illegally climbing very...
Read more
Travel

9 Of The Strangest Place Names From Around The World

0
From a place named after a successful novel to a place that does indeed have a name even though its name makes it sound...
Read more
Travel

Have You Visited Any Of These 8 Extremely Creepy Tourist Attractions?

0
From grotesque museums to voodoo markets, there are all sorts of creepy tourist attractions that even the bravest of people might be reluctant to...
Read more
World

0
Caning and other forms of physical punishment were banned in schools partially or fully funded by the government in 1986. From 1998 to 2003,...
Read more

13 Donald Trump’s Most Inspirational Quotes of All Time

0
Donald Trump has certainly come a long way, from starting off as a real estate developer to becoming the 45th President of the United...
Read more

0
Would you fake your own death? Well these 7 people below are all guilty of a faked death - from everything from fraud to...
Read more

1
We bet this will make you feel old!
Read more

9 Of The Worst Product Names Ever Imaginable

0
Quite a few products hit the shelves without much thought being given to their name. As these 9 photos show, some products have been given...
Read more

Simple Illustrations That Are More Poignant And Funny Than Your Average Sitcom!

0
Let's hope that this artist doesn't stop providing us with this level of equal quality and hilarity. These ridiculously simple illustrations are very poignant and funny.
Read more
© © Copyright 2015-2018 - Voolas - Made by few Internet vagabonds.
We use cookies on our website to give you the most relevant experience by remembering your preferences and repeat visits. By clicking “Accept All”, you consent to the use of ALL the cookies. However, you may visit "Cookie Settings" to provide a controlled consent.
Cookie SettingsAccept All
Manage consent