A man in Australia now holds the record for the most tattoos of characters from a single animated series. With over 200 tattoos adorning his back, it’s one of the sillier world records out there. That being said, there’s a lot sillier out there.

Most Snorts In Ten Seconds

Over the course of ten seconds, Eliot Juvonen was able to snort 22 times. Just as weird as it is adorable, this is one of the cuter ones on this list.

Most Questions Asked During A Drive-Thru Visit

Mel Sampson, a radio host, was able to go through 85 questions at an intercom at a drive-thru during a single visit before driving off.

Farthest Milk Has Been Squirted From Eye

This one really makes me shiver. A man in Turkey going by the name Ilker Yilmaz was able to squirt milk over nine feet from his eye in 2004. I don’t even know what to think about this one.

Can you even imagine owning over 1000 clocks? I don’t think I’ve ever even lived in a house that could contain that many clocks, let alone enough wall space. This is a fairly stupid record really. Beyond space, there’s nothing you really need here other than money.

Most Eggs Crushed Against Head In One Minute

Remember that scene in Cool Hand Luke where Newman’s character went through fifty eggs for a bet? This is sort of like that but less cool and more messy.

Person With Most Marriages

Linda Lou Taylor has found the time during her 69 years to get married 23 times! That is an impressive amount of weddings. How much does that set you back? I suppose she probably started spending less money on them as they went on, the ceremony becoming less special.

Most Slugs On One Face 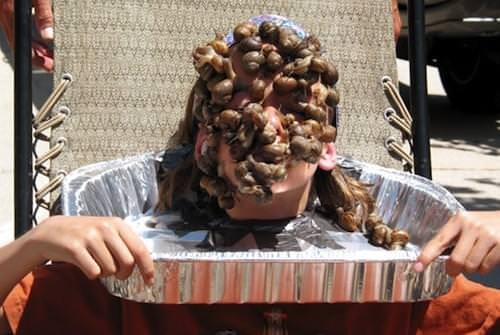 At 11 years old, Fin Keheler was able to withstand having 43 live snails placed onto his face. This one is quite like the milk record above, in that it makes my entire body feel cringe unpleasantly.

Highest Jump By A Guinea Pig

My girlfriend has let me know that the technical term for this is “popcorning.” Who knew ey? I don’t know how high the guinea pig in question jumped, but I don’t think that really matters in this instance.

What do you think of this list? Do you feel most of these records are silly or ludicrous? Let us know what you think in the comments section below if you feel you could do better.

Jake Ormrod
I am a freelance writer living in Manchester, finishing off my first novel for a Creative Writing MA. I write/read every day and have a borderline obsession with music and video games.
Previous article14 Incredibly Powerful Photographs From History that Will Move You For Sure
Next articleBritney Spears And Other Celebrity Wardrobe Malfunctions

Here Are 11 Fascinating Facts You Never Knew About Cameron Diaz

30 Funny Tumblr Posts Of This Week