For her ‘Dancing with Costică’ series, Austrailian photographer Jane Long is transforming old photographs from faded memories into surreal fantasy scenes. Using glass plate black and white images originally taken by Romanian war photographer Costică Acsinte, she colourizes, restores and manipulates the photographs to rejuvenate them: “I wanted to bring them to life. But more than that, I wanted to give them a story.”

Long begins by colouring each print, as she believes colour is crucial to changing our perception of the picture. She then blends a mixture of elements from the past and the present to form her unique and striking compositions.

The stiff, serious subjects are a product of their time, an era before smiling for photographs was common practice. The contrast between the solemn figures the fanstastical backgrounds only heightens the surreal atmosphere contained in each frame, enticing the viewer to find out more about their individual histories.

The project intially began as way for Long to brush up on her image retouching skills, until she came across an archive of work by Acsinte’s online and became fascinated by the people he captured almost 100 years ago: “I will probably never know the real stories of these people but in my mind they became characters in tales of my own invention…star crossed lovers, a girl waiting for her lover to come home, boys sharing a fantasy, innocent children with a little hint of something dark.”

Although Long intends for her images to open up new realms of possibility for Acsinte’s original works, the project has also become a source of controversy. Copyright on the photographs has long since expired, but some people are suggesting it is disrespectful for Long to alter the image of people she doesn’t know. 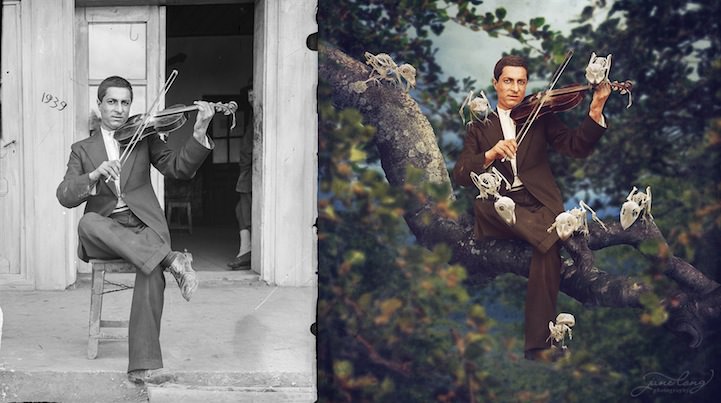 However, Long is standing by her work: “I wanted people to see these figures as real people, more than just an old photograph. I wanted to change the context of the images. Photographic practices at the time meant people rarely smiled in photos, but that doesn’t mean they didn’t laugh and love. I wanted to introduce that to the images.”

Take a look at more of her fascintating Photoshop work below!

Sophie Lloydhttps://culturepoppress.wordpress.com/
I’m a freelance journalist and general arty person. I love anything creative and I have a degree in Fine Art as well as a Master’s in Arts Journalism. I’m passionate about fashion, feminism and bacon, and have a morbid streak that can only be satisfied with pizza and horror films. Follow me on Twitter for more of my random ramblings.
Previous articleThe Top 15 Reasons We Miss Top Gear Already
Next article13 Creepiest Things Kids Have Said to Their Parents

12 Terms Only Gamers Will Understand and What They Mean

The 10 Highest Grossing Live Tours Of All Time – #3 was Amazing!

Controversial “Yelp For People” App To Be Released

Everything You Need To Know As A Pokemon Go Enthusiast!