Voolas
Home Celebrity Unbelievable Before and After of Celebrities with Special Effects - I Couldn't...
CelebrityEntertainmentFeaturedFunnyTech

In the world of camera magic and special effects, there is literally nothing that your favourite actor can’t be turned into. Cinema, the fantasy genre especially, has benefited hugely from the rise in technology, allowing them the option to turn big actors into whatever they want. Below I show off some of the better examples of CGI effects that brought you characters that you admire in movies today: 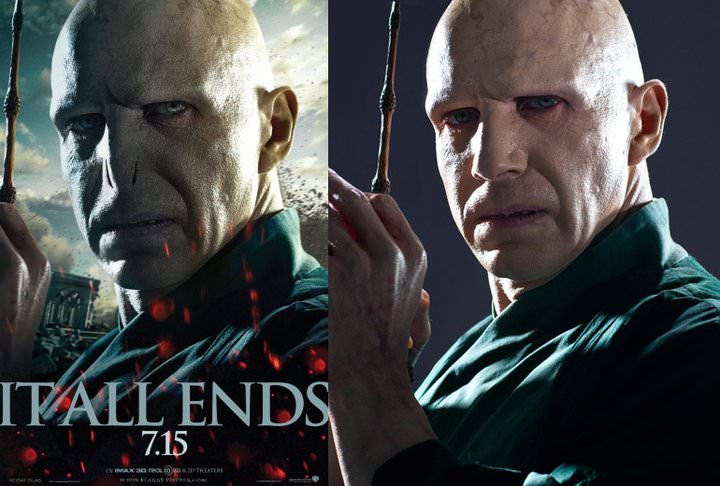 One villain that no Harry Potter fan wants to look at…

Andy Serkis is likely better known for his work as Golem, another character that required him to act while wrapped entirely tech, frolicking around on all fours in front of a green screen in the hope of capturing the mad mentality of a man gone mental. While he was rightly well received in that role, his most recent CGI role as Caesar in Rise Of The Planet Of The Apes really ramped up the impressive detail. Look at how the anthropomorphic ape even has the little gurn after Serkis delivers his line!

I’m not going to even pretend I’ve seen Avatar, but do I really have to? It was so well publicised and the plot is so basic that you can get the gist of it without ever having to sit through it. This film was sold on the amount of CGI in it and it really shows in the above picture. Although I have to say the little green ear at the top of Saldana’s head makes me laugh everytime I look at it.

Is there anything more ridiculous looking than Benedict Cumberbatch, prone, with his hips elevated slightly off the floor while pretending to grin menacingly like a dragon? If your answer to that is no, I have a GIF for later that will prove you very wrong. For the Hobbit, a huge amount of CGI and imagination was needed to bring to life Smaug, the antagonist of the piece. As you can see, a lot of work went into making Cumberbatch look a lot less like himself.

This one is slightly older but it’s still downright impressive. That being said, I can’t imagine it was too comfortable in all that kit, swaying away on what looks to be a real boat? I assume it’s green screen but who knows. As you can see, Nighy’s eyes and mouth have been circled, which I believe allowed the character of Davy Jones to retain some of the facial features the actor put into the performance. That being said, it’s nothing compared to the power of the kit seen above on Serkis.

Here are some other awesome examples of before and after of celebrities with CGI effects.

What do you think about the use of CGI in modern movies? Is it all just too much or is it a great way to add some sparkle to your cinema viewing? Let us know your opinion in the comments below and whether you think I’ve missed a better example of a before and after off my list. Oh, and I’ll leave you with this: a GIF of Benedict Cumberbatch pretending to be a dragon as he breaths fire. Your welcome

Jake Ormrod
I am a freelance writer living in Manchester, finishing off my first novel for a Creative Writing MA. I write/read every day and have a borderline obsession with music and video games.
Previous articleThis is What An Office Looks Like When You Let Your Bored Staff Decorate It
Next articleBoris Johnson is Addicted To Something – You Won’t Believe What it is…

0
Neon signs have the important job of sending out business messages and attracting customers. When a light or two burns out and the message is...
Read more

14 People Who Failed So Incredibly Hard That Its Unbelievable! #5 is Just Ridiculous!

0
This made me laugh my heart out!!!
Read more

0
Apparently 9.3 million viewers tuned in the other day to watch the Great British Bake Off - a whopping 43% of all TV viewing...
Read more

0
Over on social media app Instagram, there's a really brilliant user called @instachaaz who is making waves with his brilliant post-it note art that...
Read more

This is What Happens When You Leave a McDonald’s Happy Meal in its Box for 6 YEARS!

0
Here is a special McDonald burger that is only 6 years old! Who wants a bite?
Read more

0
From a rainbow that divides the sky, to Christmas lights visible beneath the snow, there are all sorts of things that are out of the ordinary and have to be seen to be believed...
Read more
© © Copyright 2015-2018 - Voolas - Made by few Internet vagabonds.