When you see an artist’s painting you sort of expect them to use paint, paper, pencils or even crayons! What you don’t expect is an artist who paints with dead fish, but that’s exactly what Heather Fortner from Sea Fern Nature Printing Studio does. 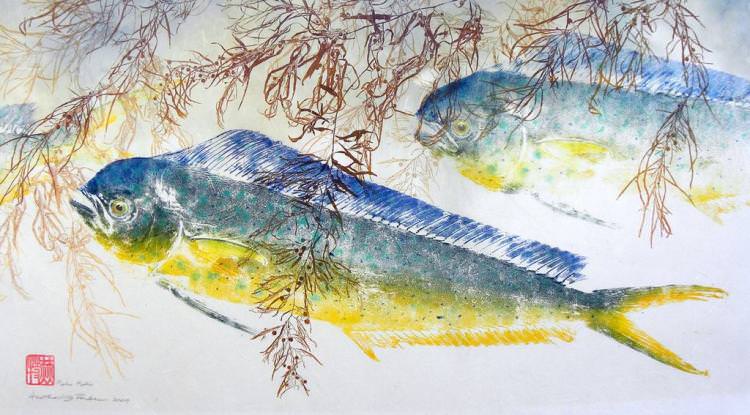 Based in Toledo, Oregon Fortner uses whole raw, dead fish to print on her artwork, which is brilliantly quirky. Based on a traditional Japanese art called Gyotaku (which literally translates as “fish rubbings”) ink is coated on to one side of the side that is then pressed onto the art. Although considered a fairly new form of artwork, Gyotaku is still very popular.

Originally developed by Japanese fisherman, the printing of dead fish allowed them (before there was cameras) to document the type and size of fish that were caught. The fishermen would then wash the fish off and use them for dinner later! These prints were considered so accurate that we were used in competitions to determine the winners of fishing competitions.

Heather Fortner has the same ideologies as the Japanese fishermen. Although this artist doesn’t eat the fish that she uses for the artwork, she only uses fish which she has found washed up upon the shore.

Heather Fortner then uses the fish that she finds washed up on shore for numerous pieces of her artwork rather than using one fish for each. She then buries the fish within the garden so that the fish can be used as fertiliser.

Who would have thought an artist who paints with dead fish could create such stunning artwork. Each painting has a life of its own, and by using real fish the artist has managed to create a piece of art with a story behind it. Fortner herself was a fisherman for over thirty years as well as being an artist.

You can see more of Heather Fortner’s work at her website here. She also does art work with nature such as leaves and seaweed.

Steph Cosway
Journalism graduate and 100% geek. I have worked in writing for the last 7 years as well as dabbling in a science laboratory. So if I ever stop writing, it's because I've been in a lab experiment and turned into a super villain. I'm particularly interested in video games, comics and Harry Potter. Oh and I have lots and lots of cats.
Previous article10 Apps For Pet Owners – #2 Is a Pet Owner Essential
Next articleMan Thought He Was Dunking On His Favorite M & S Luxury Cookies – But He Was Betrayed

Your Soundtrack for Study: 9 Great Instrumental Songs to Help You Focus

Is This The Most Expensive iPhone Case In The World?

The 10 Best Movies Based on Video Games

These 7 Films Were Completed But Never Released – The Reasons Will Leave You In Shock!

8 Things About Apple You Never Knew