Also known as ‘Dressgate’, #thedress is a viral phenomenon and meme that took over the internet in late February. You probably already knew that though, since you couldn’t go anywhere without running into somebody debating the issue earlier this year. It all began when a tumblr user posted this washed out photo of a dress that she was planning on wearing to a wedding.

An argument soon kicked off about the colour of the garment, with no one being able to decide if it was black and blue or white and gold. The dress was soon posted to other social media sites, and the hashtags #blackandblue and #whiteandgold started trending on Twitter. Millions became involved, and elaborate theories sprang up to either prove or disprove various opinions, while others complained about the amount of attention devoted to such a trivial matter. The Washington Post would later describe the argument as “the drama that divided a planet”, and one man was so intrigued by the dress he got a tattoo of it.

Despite a BuzzFeed poll showing that 68% of people believed the dress was white and gold, the dress was proven to be black and blue by the retailer Roman Originals. A number of scientific reasons have been put forward to explain why some people saw one set of colours and the others another. These include the way people’s brains process colours and how the names of various shades can influence our perception.

After #thedress there was #theshoe. In this case, the social media meltdown was caused by Twitter user @totallymendes, when she naively asked followers which nail polish better matched a purple shoe.

The image was retweeted thousands of times and the debate raged on, with many expressing outrage over another colour argument dominating the platform so shortly after #thedress incident.

Hundreds even threatened to quit Twitter, clearly unable to handle the emotional stress of such an outstanding optical illusion.

The argument was eventually solved when Business Insider UK used Photoshop to see where the colours of the shoe and nail polishes fell on the spectrum.

Lefties, you are the winners!

When 24-year-old Australian Sabrina Abu-Obeid dyed her hair in May, she probably wasn’t planning on starting a viral phenomenon. Her colourful ‘do has even been called ‘magic’. 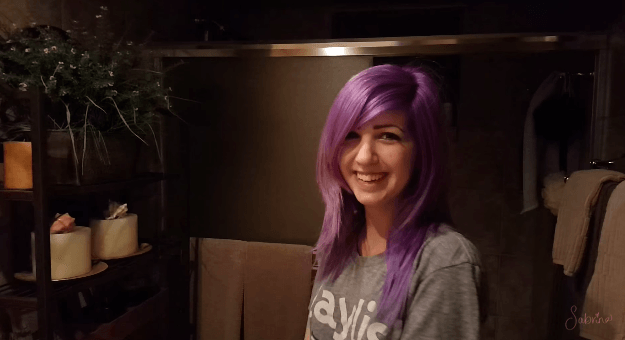 Sabrina’s boyfriend was the first to notice her new shade’s colour changing properties when Sabrina walked from the kitchen to the bathroom. It changes from purple to blue depending on the light, but not just slightly like most hair dyes; this transformation is a living optical illusion. As with most random colour debates, the internet exploded.

What colour is it actually? Not even Sabrina herself knows for sure, but she’s made a video showing people how she did it.

No one is quite sure where this one started. In April it started trending after it was posted on image sharing site Imgur, but it’s online origins potentially go back as far as 2013. Basically it’s a black and white photo of a cat on the stairs, the issue was the internet couldn’t decide whether the cat or walking up or down.

Despite some fascinating deductions, including this video and comparions to Schrodinger’s cat, there is still no answer to this one. If anyone knows, for the love of God please tell us.

The latest online sensation is the Starbucks cup, which started trending this morning and like its predecessors is driving the internet mental. Customer Greg Dorris from Brooklyn tweeted this picture of his beverage, asking followers if the illegible handwriting says ‘Greg or Corey?’.

The image has been retweeted 732 times, but a conclusion is still yet to be reached…

What do you think?

Sophie Lloydhttps://culturepoppress.wordpress.com/
I’m a freelance journalist and general arty person. I love anything creative and I have a degree in Fine Art as well as a Master’s in Arts Journalism. I’m passionate about fashion, feminism and bacon, and have a morbid streak that can only be satisfied with pizza and horror films. Follow me on Twitter for more of my random ramblings.
Previous articleGrumpy Cat and Other Most Viral Animals on the Internet
Next articleWhat’s Lady Gaga’s Real Name? Popular Celebrities With Surprising Real Names

0
Neon signs have the important job of sending out business messages and attracting customers. When a light or two burns out and the message is...
Read more
Geeky

0
With over 317 million active users and around 500 million tweets sent every day, Twitter is one of the most popular social media networks...
Read more
Funny

0
They say having kids is a rewarding and fulfilling experience, but what they don't tell you is that kids can be an absolute nightmare. Leave...
Read more
Geeky

Symptoms Of Writer’s Block And Its Cure

0
As a writer, writer's block is something I'm well acquainted with. The bane of any would be writer's life, the block can often strike...
Read more

0
Maybe you're going back to University, College, Work or maybe for some reason you're cough-bound throughout the 2022, well luckily, the saviour Netflix is...
Read more

5 Adorable Parent/Child Duets That Will Make You Go Awhhh

0
These parent and child duets are so sweet, they out-cute a than a basket of kittens coated in sugar then dipped in a ten...
Read more

0
A Colorado woman, Caitlin, told the most horrifying experience about how her 33-year-old husband, Jacob was treated unprofessionally for Coronavirus. The crisis is so...
Read more

0
Here are seven unsolvable questions that would puzzle even Stephen Hawking himself.
Read more
© © Copyright 2015-2018 - Voolas - Made by few Internet vagabonds.
We use cookies on our website to give you the most relevant experience by remembering your preferences and repeat visits. By clicking “Accept All”, you consent to the use of ALL the cookies. However, you may visit "Cookie Settings" to provide a controlled consent.
Cookie SettingsAccept All
Manage consent