We all know Chris Pratt is a beautiful human being. Not only has the slightly chubby TV funny guy turned into a gorgeous movie star, he’s also a top family man with a genuinely nice personality. Laura Duca from the HuffPost said it best: “Watching him do anything is like being asked out on a date while cuddling a puppy and finding out Nutella has fewer calories than you thought all at the same time.” Basically, we love Chris Pratt.

And, just when we thought the Jurassic World actor couldn’t get anymore awesome, he took it to the next level and let his fans design his new Facebook cover. 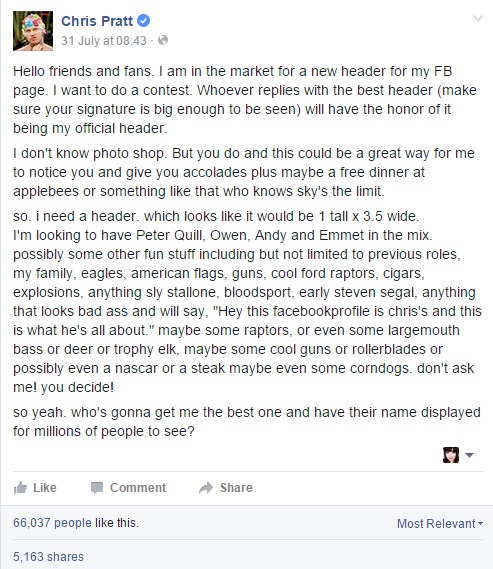 Your name on Chris Pratt’s profile and a free dinner? SCORE!

So people got to work on Photoshop, and here is what they came up with. The results are pretty hilarious.

There was a definite Jurassic World/Dinosaur theme.

And there were several references to Parks and Recreation, in which Chris played lovable doufas Andy Dwyer.

American flags also popped up quite a lot.

Some took the post literally and tried to cram as many things as possible into their attempt, with varying degrees of success.

But our personal favourite has to be… 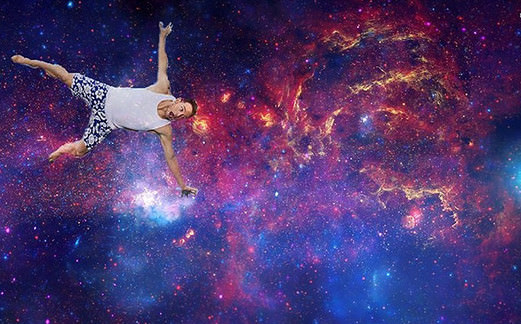 Which lol-worthy cover do you think deserves to win?

Sophie Lloydhttps://culturepoppress.wordpress.com/
I’m a freelance journalist and general arty person. I love anything creative and I have a degree in Fine Art as well as a Master’s in Arts Journalism. I’m passionate about fashion, feminism and bacon, and have a morbid streak that can only be satisfied with pizza and horror films. Follow me on Twitter for more of my random ramblings.
Previous article15 Foods That Are So Bad, They’re Good
Next article27 Amazing Harry Potter Tattoos for Every Fan

0
You don't have to read historical textbooks to keep your inner history geek purring. There are lots of amazing historical fiction books on the...
Read more

0
Get ready to meet one of the cutest stars ever!
Read more

0
It’s surprising that many companies still try to avoid paying tax, especially when they get publicly named and shamed for doing so. So here are the names of these companies... Any guesses?
Read more

What Is Autism And How Is It Caused?

0
Autism isn't just a single condition. Instead, it actually refers to a broad range of lifelong conditions that people are born with or that...
Read more

This Could Change Paparazzi And Celebrity Culture Forever

1
Fashion designer Saif Siddiqui clearly agrees, inventing a nifty new item of clothing that acts against the relentless flash photography that so many famous faces deal with on a daily basis. Well, this could change paparazzi and celebrity culture forever.
Read more
© © Copyright 2015-2018 - Voolas - Made by few Internet vagabonds.
We use cookies on our website to give you the most relevant experience by remembering your preferences and repeat visits. By clicking “Accept All”, you consent to the use of ALL the cookies. However, you may visit "Cookie Settings" to provide a controlled consent.
Cookie SettingsAccept All
Manage consent